Zen in the Art of Writing

I’m a bit of a fan of Ray Bradbury. I’m guessing anyone who’s read him probably is, and anyone who’s ever taken a passing interest in SF has surely read something of his. 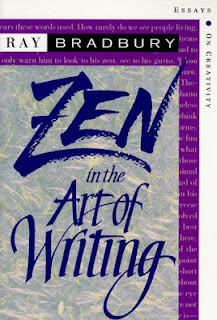 I was in SF Bokhandeln in Stockholm last weekend when I happened across Bradbury’s book of essays on writing, titled Zen in the Art of Writing. Like most writers, Bradbury had opinions on writing, and he wrote them down. I hadn’t read any of these essays; in fact, I didn’t know they existed, and, as a matter of fact, I wouldn’t generally read this sort of material, but since we’re so close to the first anniversary of the legend’s death, I made an exception. I’m very glad that I did.

I hope you will too.

I rarely write anything approaching a book review, although, once in a while I will recommend a book I enjoyed. Book reviews are tricky things. Most reviewers, these days, simply give a précis of the plot and some sort of objective judgement and leave it at that, and I don’t believe that’s what makes for a good review.

I’ve read several essays on writing, by writers, and they take various forms. Some are exhortations to write, to work hard, to knuckle down and to get on with it; they talk about the toil of writing, how tackling a novel is like running a marathon. Some work like manuals, discussing ways to plot, develop character, schedule writing days, and generally break down practical approaches. Some take a more esoteric approach to the thought processes behind the work, to developing ideas and sustaining them, to being true to themes, to making stylistic choices. There are entire essays on the omniscient narrator, on writing in the first person or the present tense, and on many other aspects of the craft besides.

Writers write about writing all the time. Let’s face it, many writers now teach writing. Creative writing courses are springing up everywhere and are becoming increasingly popular among beginner writers as a way of advancing their writing and even as a means to eventually being published.

Ray Bradbury takes none of these approaches to his essays on writing.

Ray Bradbury is a storyteller before he is anything else, so that’s what he does. In this collection of essays written over several decades, Ray Bradbury tells us stories about telling stories. He waxes lyrical about his own particular experiences, cites examples of stories and the adventures he had in their telling, and gives us insights into why he was a writer and why, perhaps, he was only ever going to be a writer.

Ray Bradbury was born to write. He was a lucky man to find his vocation, and we were all very lucky to have the products of his labours and his loves to read. Thank heavens he was quite as prolific as he was.

Every one of his essays is worth reading, but I particularly like the ideas from the title essay, Zen in the Art of Writing, a title he used very deliberately, and which I borrowed in the hope that many of you will buy and read these essays and be encouraged to find your writing mojos.

At heart, all good stories are the one kind of story , the story written by an individual man from his individual truth. - Ray Bradbury 1973
Posted by Nicola Vincent-Abnett at 11:43