Kiss and Make Up

I was recently asked the question, “What would someone have to do to lose your friendship?”

Gosh! Don’t I just have some philosophical conversations?

The fact is that none of us is perfect. Heaven forbid we should be. The fact is that I can count the number of really thoroughly good, longstanding, properly enduring friendships that I have had on the fingers of my hands, thumbs not included.

We all have friends, but most of them pass through our lives attached to circumstances. They are the people we worked with who took new jobs, or neighbours that moved on, and when they are gone they are soon forgotten. (I’m talking, of course, about those of us who pre-date universal access to the internet, because let us not forget that the FaceBook generation never seems to lose touch with anyone: friends, acquaintances, lovers, colleagues, members of endlessly extended families, friends-of-friends... the list seems interminable).

I was let down, very badly, by a very longstanding friend, and, as a consequence I was asked this question. 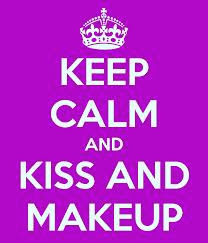 In those first moments of wondering I had no answer. It had crossed my mind only briefly, only in the worst most cutting moment of the hurt caused, to drop my friend. I never seriously considered ending the friendship. I didn’t want to. The loss of my friend would have been greater than the pain caused by the wrongdoing.

My first answers were trite: Nobody’s perfect; turn the other cheek; it’s not as if I never let anyone down...

They would be wrong.

After a week of wondering, it finally dawned on me why my friend meant more to me than the hurt the betrayal had caused, and I felt at ease with myself once more. A conversation with my friend, who was racked with guilt and couldn’t find enough ways to apologise or make amends cemented our relationship perhaps more firmly than it ever had been, despite a closeness that has spanned decades.

The point is this. We know each other and we know each other well. We share qualities, good and bad, and we both have qualities, good and bad that the other lacks. We also understand one another. My friend let me down, but acted entirely in character in the manner of the wrongdoing. The betrayal, if not entirely expected, came as no great surprise.

We give up our friendships too easily over troubles that can be solved with a little, or sometimes quite a lot, of careful thought.

None of us is perfect, least of all me, and if and when it comes time for me to show some weakness or do some wrong I hope and believe that I too shall be forgiven.

Posted by Nicola Vincent-Abnett at 15:27