Funny, isn’t it, how we all want to put our best foot forward, put on a front, show our nicest side on the outside?

Funny, isn’t it, how we all want to be liked, loved even, by just about anyone and everyone?

Funny, isn’t it, how some people even manage it?

I guess that’s the best reason for why I was absent from the blog for so long. 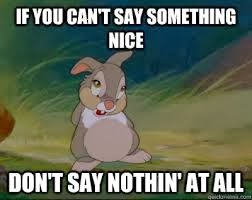 I think it was Thumper from Bambi who first taught me the lesson, “If you can’t say something nice don’t say nothin' at all.” It’s a lesson that I have been trying to learn for several decades, and one that I doubt I shall ever quite master.

There are times, though, when I do stop talking.

The husband tells me that I am the most honest person that he has ever met. I doubt him. I always assume that pretty well everyone is as honest as I am.

It isn’t true, though, and it never was.

I was always the kid elected to stick her hand up to say something unpopular or unseemly or to make a complaint, and I was always unfazed by the thought of opening my mouth and always willing to do it. I do it still. I never think twice about letting someone know when the loo-roll has run out in a restaurant bathroom. I don’t make a fuss about those things; I just quietly tell someone. How hard is it?

Take this example: The husband and I were in a well known restaurant chain with a couple of young people for dinner. Halfway through my meal, I forked through the remains of my pasta and found a daddy long legs. Now, the thing had been cooked to buggery so it wasn’t going to do me any harm, it certainly wasn’t going to fly out of my dinner and attack me, and besides I’d eaten half of my meal already, so I stuck the corpse on the edge of my plate and carried on.

I realise that some of you will be horrified by this, and, honestly, if I’d been almost anywhere else I probably would have complained there and then, but we’d had a good day, I’d already drunk a couple of glasses of wine and the conversation was lively, and I really couldn’t be bothered. When the bill arrived we were asked if everything was OK, and I simply said that, actually, there was a bug in my dinner, which I pointed to. The poor waitress recoiled and scuttled off, returning a few moments later with her manager. I don’t think I’ve ever been so comprehensively comped in my entire life. No fuss, just a heart felt apology and a vast amount of comping.

This was one of those instances when telling the truth pays.

There have been plenty when it didn’t.

As a young woman I told the truth and it alienated people. I was full of opinions and I didn’t care who heard them, in what tone or under what circumstances. I was foolish and I was wrong. For the most part, I don’t do that any more. I still tell the truth, but I try very hard not to be inappropriate about it, and I try very, very hard not to be an utter bitch... ever!

Yes, I complain... I complain when the husband would find it too difficult or embarrassing to do so, but I do it with a smile on my face. I lean in and I begin with something like, “I hope you can help me.” I never raise my voice, and I always apologise for making the receiver of the complaint’s life difficult.

I have stopped calling a spade a shovel.

I don’t just tell someone who’s being a tosser that he’s a tosser. I tell him very sweetly that what he’s doing makes him look like a tosser, because, do you know what, that bloke is trying to put his best foot forward, too. That bloke is trying to show his nicest side on the outside, and just because he’s failing I shouldn’t be a bitch about it, I should help him out. That bloke probably isn’t actually a tosser, because most of us aren’t, not really.

It’s in my nature to say what I think and think what I say. I do it in my life, every day, and I do it here. I tried to change, but I’m a lousy liar, so I had to stop. When I couldn’t lie, I just tried to find better ways to tell the truth, and that seems to have worked out for me… for the most part.

When I have a bad day, or week, or month... Well, you didn’t need to hear some of the truths I ended up blurting out while I was absent from the blog, but at least I had the good sense not to commit them to an eternity on the internet...

Go me!
Posted by Nicola Vincent-Abnett at 11:06