All the Girls are Bored, and all the Men are Gay

OK, I guess that requires an explanation. I don’t sleep much, and when I don’t sleep, I like, at the very least, to rest; add to that the fact that Netflix is cheap, and I can watch it on my i-pad, on my nightstand, without disturbing the husband, and you can see how I might watch all kinds of not very inspiring movies and tv shows. Trust me, you don’t want to watch anything that’s going to get your mind in a spin, or make your heart race when the intention is rest and relaxation. Dawson’s Creek, obviously, fits the bill... unless you count the fact that it inspired a blog. Crikey!

So... I was watching Dawson’s Creek last night. I believe it was series 1, episode 3, Kiss, in which, funnily enough, almost everyone gets to kiss someone. At the top of the episode, Dawson Leery, played by James Van Der Beek and Joey Potter, played by, wait for it, Katie Holmes! (whose name, hereafter, will always bear an exclamation mark), have a conversation about movies and whether or not they can reflect real life and, in particular, real romance, and Katie Holmes delivers the line, “The girl’s bored, the guy’s gay; it’s celluloid propaganda.”

The show aired early in 1998, shortly after Holmes’s nineteenth birthday, and, of course, she was acting; she was speaking the lines written for her character.

Fifteen years later, in 2013, I gasped when I heard that line coming out of her mouth.

At thirty-four, Ms Holmes! is groomed and slick, and gorgeous and successful, and she’s the third ex-wife of one of the great Hollywood stars of the late 20th and early 21st centuries.

Katie Holmes! lived the Hollywood dream... And yet, Joey Potter, sassy, wise Joey Potter, is described by Dawson Leery, in his very next breath, in this episode of Dawson’s Creek, as a “bitter, cynical, jaded thing.” She doesn’t look it, does she? She looks sweet and wholesome and innocent, and so does Katie Holmes!

Appearances can, of course, be deceptive. That’s the point of Hollywood.

Nobody knows what goes on inside any marriage, not in downtown Maidstone and not in Hollywood, and I’m certainly not going to pretend to know. We do all know that sustaining a healthy relationship over an extended period of time isn’t necessarily easy, and is probably made more difficult when questions of distance and religion, and any number of celebrity spotlights come into play.

I wonder whether marriages are arranged, though, by ambitious girls making sure they're at the right parties, seen by the right agents and managers, and in the right rooms so they can be introduced to the right men. I wonder how clever those prenup contracts really are. I wonder whether young women really are still cynical or jaded enough to think that being seen with the right leading man will make a difference to their careers. I wonder how happy the men are to have those girls handed to them on a plate: gay or straight, serious or playing a game, in it for a photo-op or a potential marriage.

I always hope that we’ve got past that. I always hope that women can stand on their own two feet, believe in their own worth in any industry, and not have to rely on connections. Of course, in Hollywood, who’s a girl like Katie Holmes to meet? She was almost bound to meet a leading man or a powerful man, a director or producer, and why not? It’s either that or her dietician/personal trainer/plastic surgeon, right?

Turn it on its head, and who is Tom Cruise supposed to marry, apart from his leading ladies? I suppose he could decide not to marry at all, like George Clooney (yes I know he was married, briefly, in his twenties, but isn’t everybody?) but that’s rather radical, even by modern standards, especially in Hollywood, which seems so very old-fashioned, so marriage and family oriented.

It matters less and less with the passage of time, but, since Hollywood was built and filled with all those beautiful people, the World, and the suits who were worried about the cinema-going public, in particular, was really afraid that we’d stop going to the pictures if we thought our screen idols didn’t conform to our notions of normal and desirable sexuality and a normal and understandable lifestyle.

How many gay men do you know who go to the cinema to see their favourite leading men in their favourite action movies, regardless of the fact that Bruce Willis or Denzel Washington or Mel Gibson, or, for that matter, George Clooney, or Tom Cruise gets the girl in the end?

That’s right... All of them! Get over yourselves, film producers and publicity machines everywhere. We don’t care about our leading men’s personal lives, or our leading ladies’ peccadilloes, any more than we care about who the best boy’s sleeping with. Let them have their lives. 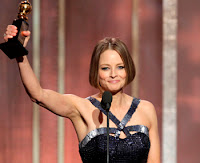 My older daughter is gay. I’m immensely proud of her. She should have had Jodie Foster as a brilliant role model for her entire life. Instead, the actress, director, producer and leading light of modern cinema for the past thirty... almost forty years led a very private life, fighting off the World. My daughter and gay women like her everywhere have only had their role model for just the past few months, since Jodie Foster came out at the Golden Globes, 2013, aged 50! It doesn’t seem right, somehow, does it?

Posted by Nicola Vincent-Abnett at 10:23