Jealousy is a terrible thing.

We all suffer from it from time to time.

I’m not easily dragged into the clutches of jealousy, especially not of the professional variety.

Let’s face it, it’d be pretty hard going, living with the husband, if the green-eyed monster was going to rear its ugly head every time a book, story or comic was published. The man has six New York Times bestsellers to his name, for crying out loud... in four categories! You just can’t wake up and be envious of that every day.

Besides, he does what he does, and I do what I do, and our skill sets dovetail together very nicely, and, for the most part, everybody’s very happy, thank you very much.

Once in a while, and not for a while now, I read a book that I wish I’d written. Usually, though, that comes with the glow of satisfaction of having read something wonderful. I suppose that’s a form of envy, but I don’t want to tear anyone’s eyes out. It’s not a competition. That stuff just makes me want to write, to polish off whatever small talent I have and get on with it. That’s got to be good, right?

All around me, new writers are emerging and getting book deals, and passing me by. Once in a while, I get a little twinge of something approaching a feeling of... oh, I don’t know, but certainly nothing as grand or destructive as jealousy, regret, perhaps... but, as a rule, I’m very happy for them. 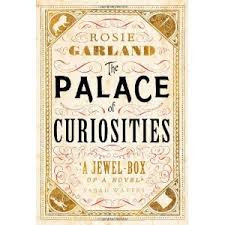 This month, Rosie Garland’s novel, The Palace of Curiosities, was launched with a bit of a fanfare, by Harper Collins. They paid quite a lot of money for this and another book by the debut author.

I have not met Rosie, although I know of her work as a performance poet, and with the band The March Violets. You might be familiar with her name, because it has appeared before in this blog. Rosie’s novel The Palace of Curiosities began life as The Beast in all Her Loveliness and it won the Mslexia prize that Naming Names was runner-up for.

I have bought Rosie’s book, of course I have, and you should too. This novel was chosen, from literally thousands, by Jenni Murray, Sarah Waters and Clare Alexander, and it sold for six figures in a two book deal, so it's a pretty decent bet that it's good!

Oddly I cannot bring myself to read it... Not yet.

I just can’t help feeling that twinge, though.

I’m determined, though, that for as long as it remains on file, Naming Names will always be on the table. I might one day write a better book, I suppose, but, somehow, I doubt I will ever write one that means more to me.
Posted by Nicola Vincent-Abnett at 09:50