October is almost upon us, and we’re all being encouraged to stop drinking for the duration.

Movember has been a thing for a while, now. Men grow their facial hair, and some of them collect funds for charity. It might just be an excuse not to shave, it might be a genuine desire to raise money for charity in a way that shouldn’t be too taxing. Not everyone is up to running a marathon, after all. Of course, many, probably most, women would probably struggle to grow a moustache, but they can always sponsor the men in their lives who choose to grow and sport a moustache for a month.

Movember’s charity is prostrate cancer, so there’s some correlation between the moustache-growing male and the charity he is supporting.

A lot of people began to give up booze for January, some years ago. I don’t know if this had a name, or a purpose, or whether it was simply a reaction to Christmas and New Year over-indulgence, and the old tradition of giving something up for new years.

Either way, this modern tradition of giving up booze in January has been adopted and moved to October… It rhymes with Sober, don’t you know? 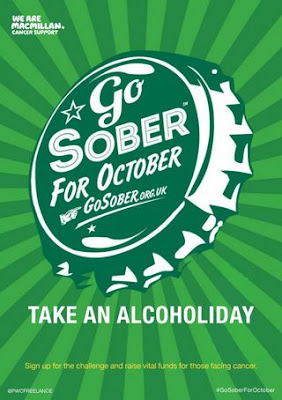 I have no quibbles with the cancer research charities. Charity is a good thing. In my limited opinion, I don’t believe healthcare, education or the disabled should have to rely on charity to make progress, but that’s the way it is. I think our taxes should adequately cover healthcare, education and the disabled, but they don’t… That’s Socialism, and socialism has become a dirty word in World politics.

The cancer charities clearly benefited from Movember, so decided to adopt another month to drive more charitable engagement.

I’m sure that alcohol could be a contributing factor in some cancers… Almost everything seems to be. I’m not going to search for the sources that prove it, though, because alcohol and alcoholism might be responsible for accelerating cancers, but they are responsible for much more obvious ills in our society.

If I’d had to guess what Sober October might be in aid of, I would immediately have thought of addiction centres and liver disease, not to mention violence and domestic abuse. No charities associated with any of these direct results of alcohol abuse are benefiting from Sober October.

I applaud the cancer research charities for homing in on an effective way to collect our charitable donations, but they already have Movember, and there are only twelve months in a year. Had they been charitable, they might have left the other eleven months for other charities to adopt.

Sober October would be a great way to help and educate the addicted, support victims of domestic abuse, and maybe do some research into liver disease. Charities like Alcohol Concern, Mind, and Refuge could all benefit from this kind of publicity

Off the top of my head, March might be given over to military based charities, to veterans and to victims, to PTSD and to prosthetics.

Again, no offence to cancer charities, they do wonderful work, and my family has not been immune from the disease, but there’s also such a thing as fair play and share and share alike.
Posted by Nicola Vincent-Abnett at 13:22