Women think that men like clever, pretty women, which is weird, because most men are absolutely terrified of them.

I like women, and the older I get the more I like them. Sadly, women have never seemed to like me very much. The people I have formed the most enduring friendships with have invariably been men. I have adored them, but I really would have liked to have had more women like and befriend me, especially in my teens and twenties when good girlfriends seemed to me to be about as rare as hen’s teeth.

Honestly, making friends has become easier as I have got older, and not only do I have more women friends now than I have ever had, but I am finally finding it easier to make good women friends. I feel blessed.

It was in conversation with my bone-mage that the question arose as to why, historically, I have found it difficult to make friends with women. I said I thought it was because I was ‘a bit rubbish’.

My bone-mage, a longstanding male friend, wasn’t having any of it, and I was forced to think about it. It isn’t a pleasant experience, wondering why people don’t like you, and, while I haven't actually avoided the issue, thinking too much about it in the past has left me feeling rather depressed.

I took a moment. I’m plain-spoken and opinionated, and I know that can alienate people, but not everyone, surely? I’m not horrible, cruel or malicious. I’m more likely to wince at another’s misfortune than laugh about it. I won’t say anything behind anyone’s back that I won’t say to his face, so what does that leave?

I managed to get a degree before the big education reforms of the late 80s were put into practice and I was the first of my family to do so, and, on top of the obvious disadvantage of being clever, I was also, heaven forfend, good-looking. It’s only now that I look back at old photos that I realise just how good-looking.

I wouldn’t go back, though. The 80s should have been a time of great promise, but, actually, I was sad and lonely, and rather adrift in the World, not least because I didn’t have the security of good and lasting friendships; I do, now, and I’m eternally grateful for them. 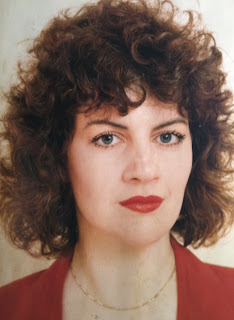 I won’t look like this again, but my looks weren’t a blessing then and losing them isn’t a curse now. I hope that ‘clever’ doesn’t go away, but, on the subject of ‘being a bit rubbish’; I suspect I probably was, and I do hope I’m doing better with that.
Posted by Nicola Vincent-Abnett at 08:59