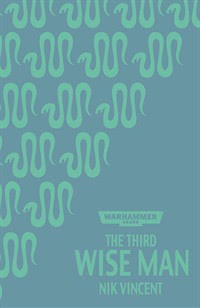 I’m rather delighted to announce that my short story, “The Third Wise Man”, is being published today as part of the Black Library’s Advent Calendar. It’s awfully nice to be at the mid-point of the event. The husband had the first story on the first of the month, and it would have been lovely to have had my story published on my birthday, on Christmas Eve, but obviously they’re saving that slot for one of the big guns, maybe the wonderful Graham McNeil?

The story is short... It’s very short... It’s flash fiction, after all, so I’m not going to give anything away, but I hope that some of you will pop over here and take a look at the blurb, and maybe even download it and read it. You never know, you might enjoy it. What I will say is that I’m hoping to do quite a lot of writing for the Black Library in the near future.

Most of the collaborations that I’ve worked on with the husband for the Black Library, including “Gilead’s Curse”, which is available in the spring, have been set on the Warhammer World, but I also wrote a short story called “Cell” for the Sabbat Worlds Anthology in 2011, so I have dipped a toe into the Warhammer 40K universe, and I enjoyed it so much that I’ve decided it’s time to write more in the 41st millennium.

The husband has invited me into the Daniverse, which is what the guys at Black Library Towers call his little corner of the 40K universe, and he and I are already working on plots for two possible books.

We’ll be revisiting popular characters, we’ll be butting up against current campaigns, and we’ll be plotting an awful lot of shooty-death-kill-in-space, which, of course, is the technical term for what we do.

It’s going to be a busy year, but, rest assured, once those plots are approved, I’ll be right back here to let you all know what comes next.
Posted by Nicola Vincent-Abnett at 11:41