Depending on whose Intellectual Property I’m working with, some of the most fun I can have as a writer of tie-in fiction involves filling the gaps.

I alluded to this in part ii of this short series of blogs, and I’m going to talk about it a bit more here.

The husband is a master of filling the gaps, and he does it admirably with the Black Library  and, in particular, with his work in the Warhammer 40K universe.

Just look at that word ‘universe’. Go back to first principles and remember that a universe is a bloody big place, and there must be a lot of little corners of it that are unmapped, uncharted, have no known history, and that no one knows a damned thing about. Start there and it’s possible for a writer to fill his own toy box with a large family of toys, essentially of his own manufacture. There’s a damned good reason why there’s a corner of the Warhammer 40K universe that is now referred to as the Daniverse.

It’s a pretty amazing place, too, and it’s a place where I’ve been allowed to play, and fill in my own gaps. 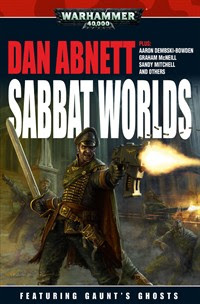 A couple of years ago, Dan and the guys in the Black Library office decided it would be fun to do a book of short stories revolving around Gaunt’s Ghosts and the Daniverse. Dan invited some of us writers to choose our favourite elements and weave our own tales. We didn’t write about Gaunt or the Ghosts. We didn’t just up-end the toy box and run riot, but that didn’t stop us having a lot of fun.

When the husband asked me if I’d like to do a story, I wanted to do something new, and I’d always been fascinated by Gereon and the idea of resistance in the face of occupation, rather than full-on, all-out war. I’d always wondered how that might work in the 40K setting. I also liked the idea that it hadn’t been done before, that it was virgin territory. That’s what I like to do; I like to come at the thing sideways. I like to take that .001 percent of the 40K universe that isn’t, at least directly, involved in war, and stick that under my microscope.

Just for fun, I’m going to reconstruct my thinking for ‘Cell’ right here.

I’ve always thought that the Sabbat Worlds stories are analogous with events of the World Wars, so that was my starting point for ‘Cell’. My analogue was the French and Dutch resistance during the Second World War. So far, so good. I decided on small groups, or cells of resistors with limited resources, low levels of trust, and difficulty in communicating. Back to 40K to pick a world to be occupied. It made sense that it should be an agri-world, because that’d be useful to the enemy.

So, an agri-world, but one that seems SF in some way, that’s different, other. Again, I like real world analogues, and I live in Kent, so hop farming came easily to mind, and adapting hop-pickers stilts suddenly made my agri-workers unique.

What to call my characters? A lot of writers struggle with names, and I know this for a fact, because, as a reader, I struggle with a lot of the choices writers make when it comes to names. I like to choose families of names, for consistency throughout a story. My analogue was the French resistance, and, as it happens, Abnett is a Huguenot name, so I found a source for Huguenot names, chose some, adapted the spellings, and built a list. Simple.

I had some of the key elements of my story that worked with 40K, which dove-tailed with what I already knew about the Daniverse and about the tone and feel of the intellectual property. I wasn’t breaking anything, IP-wise, and all of those elements helped to build a convincing whole, but didn’t, strictly speaking, rely on an exact, specific knowledge of anything that might appear in a 40K codex.

On the other hand, another writer might write a story filled with lasguns and Space Marines and Imperial Guard and Bolt Pistols and Leman Russ tanks, and it still feel very generic, and it still feel as if the weapons and the brand of space warrior and foot soldier and tank could be changed, and the story could belong in any generic universe.

Writing for any intellectual property is a skill, it is a discipline and it does require research, but sometimes it’s all about a writer’s gut and his heart and his will. Sometimes it’s about throwing caution to the wind, it’s about being unapologetic, and it’s about being unthreatened by the response of the critic and unembarrassed about just what goes into the thinking process. Often, that’s when the writing really works.

Posted by Nicola Vincent-Abnett at 10:47