The husband and I took a couple hours out of our very busy schedule to watch a movie on Sunday night.
We recently put a couple of books to bed.

In the past few weeks, he finished writing the Guardians of the Galaxy novel, Rocket Raccoon and Groot Steal the Galaxy, we finished collaborating on the Kingdom tie-in novel for 200AD, titled, Fiefdom. I also delivered rewrites of Naming Names, now called something else, to my lovely agent. And the husband also just put to bed a huge job with a great dollop of time pressure. So, we were due a little down time. 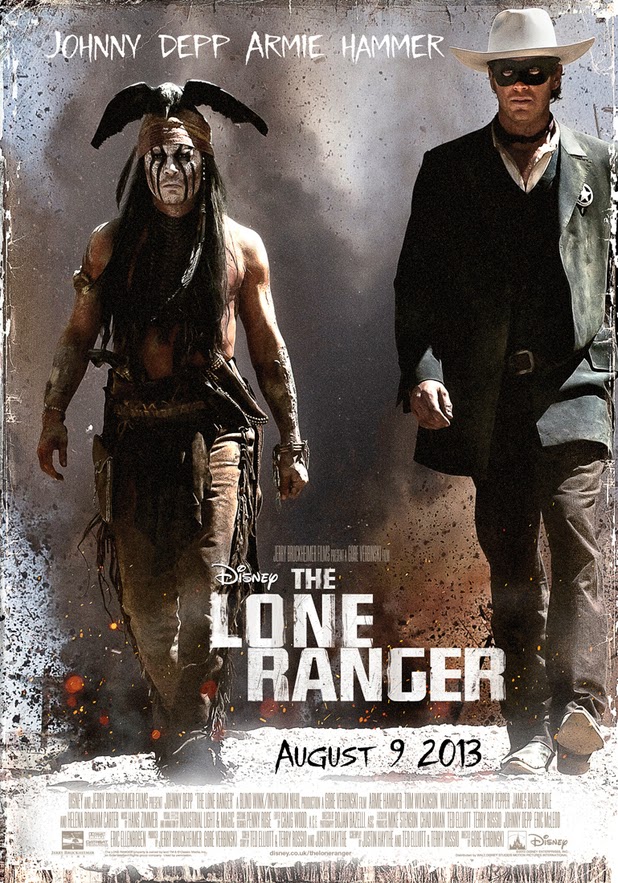 Our movie of choice was The Lone Ranger, given to us as a Christmas gift by the dort. We’ve been so busy that we’ve only just got around to ripping off the cellophane!

I don’t often review things on the blog, and I’ve stopped reading reviews, for the most part. There’s a reason for this, and it is, mostly, that reviewers have largely forgotten the art of reviewing.

Most reviews, it seems to me, now consist, in the main, of a précis of the work being reviewed. I generally don’t want to have that information. Don’t tell me the plot! Tell me what you thought of the thing, artistically. Was it well-thought-out? beautifully shot/directed/acted? was the story compelling? Were the special effects... well... special? Did the soundtrack add to the experience? These are the sorts of things I want to know.

I have become a little jaded about movies.

They seem to aim terribly low. The funny ones no longer seem able to make me laugh, the romantic ones seem cynical, and the dramas either too dramatic or not dramatic enough.

There seems to be a lowest common denominator, spoon-feeding quality to them that, at best, doesn’t interest me much and, at worst, is rather off-putting.

I enjoyed this film more than I have enjoyed a film for a very long time.

OK, I could have lived without the framing device. Kids are always a bit of a problem in films, and they’re generally included for sentimental reasons, although Mason Cook put in a pretty decent performance as Will. The same applies to the very old, and, in this case, although the make-up was good, I wasn’t convinced by Johnny Depp’s physicality as an old man. It was fine, but I didn’t think the coming to life of the exhibit in the museum and cutting back to the scenes between the boy and the old Tonto added anything much to the movie. It stood perfectly well without them.

Gore Verbinski knows film, and he’s not afraid to reference it, lots of it, in The Lone Ranger. I loved seeing and hearing nods to films down the ages all the way through this movie, and I’m guessing there were plenty that I missed. He was also unafraid of referencing the source material, and finding nuance in it, and humour.

This was Johnny Depp’s film of course, and there were times when he stole the set and hammed it up, but I’m willing to forgive that. Much of it was in a good cause. Subverting the character with his origin story two thirds of the way into the movie was a deft move, allowing in a breath of fresh air and justifying Depp’s antics. He understood the role.

Initially, I wondered whether Armie Hammer wasn’t a little underpowered as the eponymous hero, but, again the story arc and character development took good care of that.

I thought the cinematography was terrific, the colouring, in particular was lovely. The soundtrack was great, but you’d expect that from Hans Zimmer, and I particularly loved the sparing but judicious use of the William Tell Overture. Costumes, make-up and effects were all used effectively.

There’s no such thing as the perfect movie, but, on this one, I have to agree with Philip French. I liked it a good deal more than a lot of other people did.
Posted by Nicola Vincent-Abnett at 12:23