It has been a busy week.

Sometimes I wonder if we could be more busy, and I’m pretty sure that we couldn’t, and then a week like this turns up. There’s no time to blog... For heaven’s sake, there’s barely time to eat or sleep!

Then we are asked to give interviews and commit to book signings and events, and suddenly the workload has to get condensed into just a little less time than we anticipated having.

There are high points, in the work and in the life.

We went to the dort’s grad show last weekend, and that was pretty spectacular. I wouldn’t have missed it for anything. It was followed, fortuitously, by a comic-con in the very same city on the following day, so birds and stones and all that, but it was still three days when we weren’t ‘working’, so we’re catching up again.

This is by way of saying that I’m writing a blog on Tuesday night, right on the verge of going to bed, ahead of getting up with the husband at five o’clock tomorrow to see him off to Berlin for meetings while I tackle the end of a novel, and all because I’m a fan of a hashtag.

Tomorrow, or rather today, is Women Writers Wednesday blog day, also known as #wwwblogs on Twitter. We’re a vibrant, various bunch of women who write and blog, and share and retweet. I like it. I try to contribute and I like to read other women’s blogs and I recommend the ones that I enjoy. It’s all grist to the mill.

The last couple of weeks the lovely people at Women Writers have suggested that if we haven’t planned a blog we might want to write a story and share a recipe. Last week I complied. I enjoyed it.

Many of my regular readers know that I write about all sorts of stuff. If something’s on my mind I’m quite happy to talk about it. I’m a sharer. I don’t plan blogs much, so sharing a story about a recipe came easily enough to me.

I’m going to tell you this.

I’m going to tell you that I make the best sticky toffee pudding known to man or beast.

There is a reason for this.

Sticky toffee pudding became a thing a decade or so ago. I don’t know why it became a phenomenon all of a sudden, and I’m not sure why it wasn’t a phenomenon before the last decade or so, but there it is... These things happen.

My problem with said dessert is that it is so often a terrible disappointment. So often it just isn’t sweet enough. So often it tastes of burnt sugar. So often it lacks the required moistness. It simply isn’t a pudding that can be relied upon... And how I like my puddings.

But here’s the rub:

You will only eat this pudding at my table, in my home.

The upside is that if you’re nice to me I’m more than happy to invite you over and make my recipe. You only have to say that you’re a fan of this pudding and I’ll very happily make it for you. I’ll serve it with cream or custard, or even ice-cream, if that’s your preference. And I’ll serve it every time you come to supper. All you have to do is ask, but be warned, I’m not sure there’s another food stuff on Earth that serves up a grillionty-ten calories in every bite (and yes that is a technical term). It’s not for the faint of heart or the compulsive dieter. 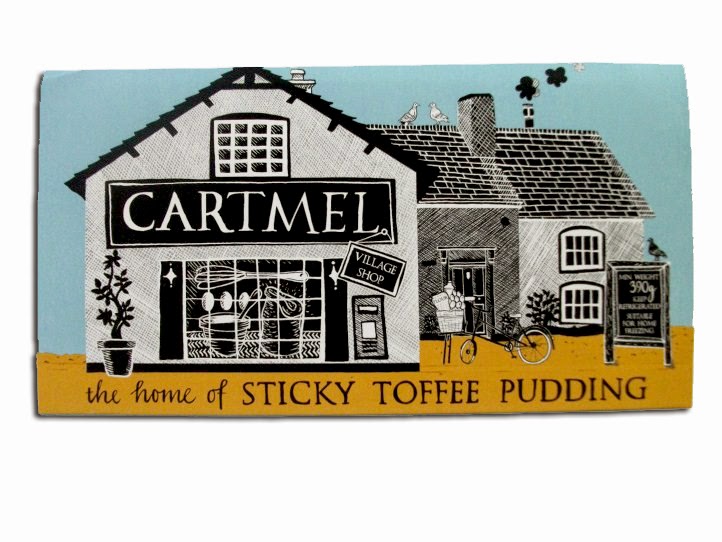 Not for nothing, but the dort feels exactly the same way about her world class carrot cake.

In the meantime, I can recommend the Cartmel sticky toffee pudding which is available to purchase. It’s absolutely nothing like mine, but it is one that I eat and enjoy regularly. Go on... treat yourself.
Posted by Nicola Vincent-Abnett at 10:22