I’ve been meaning to talk about sex education for a little while now. I just didn’t have a hook to hang my argument on until I saw a tweet a couple of days ago. It was quite, quite brilliant.

I was one of those parents who never had any problem with educating her own kids on the subject of sex. It doesn’t embarrass me, and answering kids’ questions on the subject isn’t a problem, either.

“Where do babies come from?”

Of course, if they ask, “How do they get in there?” You’ve got to answer that question too, and I did, and I used the words ‘penis’ and ‘vagina’, and I talked about the mechanics in a matter of fact way as if I was talking about anything else.

We call them ‘the facts of life’, but for me ‘the facts of life’ include managing money and being responsible, holding down a job, being loyal to friends, and being civil to people, among other things, as well as conducting sexual relationships. We should discuss all of these things with our children. We should equip them for a full, satisfying adult existence. We don’t, always do that, of course, but we should. 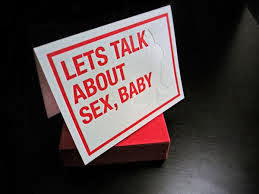 We don’t do it because of our own embarrassment, and let me make it clear that I believe that it’s absolutely critical that we do it. Sex education helps prevent unwanted pregnancy and the spread of sexually transmitted diseases, and every child should be armed with the knowledge that protects them from those things. It's a no-brainer. I don't want to end sex ed in schools, I simply want to supplement it.

We put our children’s sex education, and, increasingly, our children’s moral and social education in the hands of others, usually in the hands of overworked, underpaid teachers, whose ideologies we might not necessarily share, and who are hamstrung by laws and by the rules laid down by the governing bodies of their schools about what they can discuss with their pupils and how they can interact with them.

It’s not necessarily right for our children, and, personally, I’m not at all sure it’s fair on the teachers.

Honestly, I think a lot of that happens naturally in the environment that a child is raised in. I think a lot of that happens in the home. The husband and I shared time and a home with our children. They saw how we were with each other. They saw how we treated each other, how we interacted, and they knew what we expected in their interactions with each other. We didn’t fight, we didn’t raise our voices, we were all heard, and treated kindly and with respect. We were always caring and affectionate in our dealings with one another and with the children.

You can’t teach that in a classroom.

There is a move towards sex and relationship education, but all the time that children live with unhappy and or dysfunctional relationships in their homes that will be the example that prevails in their lives. You can’t un-teach that, either.

None of it’s real or pleasant, or, dare I say it? Sexy!

It leads to problems. It leads to misunderstandings about sex and it leads to skewed expectations.

Every past generation and every couple in every combination has had the right and the privilege to invent sex. I think that’s over. I think that, with the access that kids have to the internet, and the lack of real involvement in their education that parents seem to have, many kids know far too much about all the wrong things, and that there is no innocence and no trepidation and hardly any excitement as they embark on their own journeys of sexual awakening.

I was thrilled, then, to see this tweet, posted by Rachel Vail @rachelvailbooks

Great point made in son's college orientation re sex/safety/respect/etc: "Consent is really too low a bar. Hold out for enthusiasm."

I felt sad and sorry for this first generation of computer taught kids, who, it seems to me, come jaded to sex before they’ve even experienced its pleasures, but perhaps I was wrong. I certainly hope I was.

Posted by Nicola Vincent-Abnett at 12:07