We’re breaking for lunch after a very busy couple of hours... Well, strictly speaking I was only as busy as I wanted to be. I did join the husband once or twice when called upon to sign the occasional copy of one of the Gilead novels or a Sabbat World’s Anthology, and it was a pleasure so to do. Mostly, though, I just bibbled about, stopping to chat with some of the people I recognised.

It was lovely to see Philip for a proper conversation, and of course Pete of Fifty Shades of Geek fame and Oliver, who to my delight came to tell me that he’s getting married! @OldManGun should have been here, but I gather that he’s poorly in bed, so I hope he feels better soon, but it was a pleasure to see Lee. I was hoping to catch up with Shane, Owen and Connor, and I even visited their VIP box, but no luck so far... Maybe I’ll catch up with them this afternoon.

I have had the pleasure of seeing a constant flow of people filing past Guy Haley, Chris Wraight, Anthony Reynolds, Andy Smillie, Darius Hinks, Nick Kyme, Bill King, Graham McNeill, Neil Roberts and of course the husband, Dan Abnett. Between them they’ve signed an awfully lot of books, hinted at any number of upcoming story lines and nodded and winked at the endless possibilities that lie ahead for the Legions of the Horus Heresy, not to mention their many and various favourite characters.

I also happen to know that the husband has taken down a name or two for later use in future Gaunt’s Ghosts novels. You just can’t have too many red shirts.

Lunch is almost over, but just before they start to stir, here’s a photo of the writers looking out over the floor of the NIA, watching the World go by. 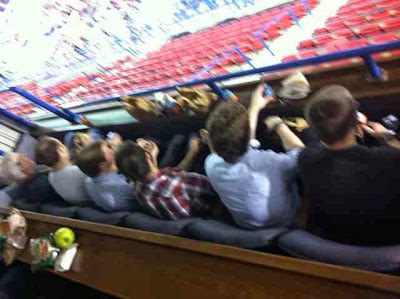 And here’s the floor of the NIA... Look at all those people! 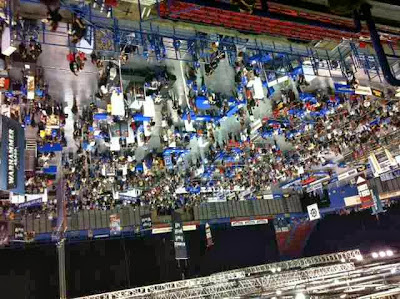 Posted by Nicola Vincent-Abnett at 13:13