I’m not given to reviewing stuff on this blog; it’s not a review site and I never planned it that way. I do, obviously, plug stuff from time to time, so feel free to take a look at anything I’ve ever talked about, and, in particular, take a peek at “Dragon Frontier” by the husband, Dan Abnett, which I think is going to be a huge hit for Puffin. 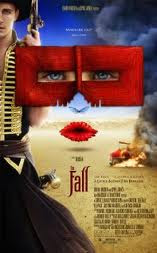 I’m not going to actually review “The Fall” either.

Last night Richard and Lucy came for take-away and a movie. It was Lucy’s choice, and she brought “The Fall”. Dan had mentioned the film to me a while ago, and we’d been planning to see it.

I don’t go to the cinema much, and I really don’t go to watch anything blockbuster-y or anything with big visuals or big sound. The cinema isn’t what it it used to be. It’s always too full-on and it’s always too loud, and there’s always a nine-year old girl, usually a Chav-tastic little beast in a pink velour tracksuit with something inappropriate embroidered across her ample backside or, heaven-forfend, her chest, and always, always texting on her smartphone in its rhinestone-encrusted cover. There’s always too much noise and too much moving about from the audience, and no one ever sits through the credits any more. Cinemas smell pretty gross these days, too. Most public spaces that get filled up with people eating and drinking, and farting and sweating for hours at a time don’t smell great since smoking was banned, but that isn’t really my point, and I’m not an advocate of smoking but... yadda, yadda, yadda...

The bottom line is that I do visit the cinema, but only when the daughter and the husband talk me into going to a matinee with them, generally to see some sort of comedy chick-flick that probably won’t include bonkers visuals or too many explosions; I believe our last outing was to see “Bridesmaids”.

Last year we converted one of the little rooms at the top of the house into a screening room. We bought a dvd projector and some Goo screen paint, and added the cheapest surround sound system we could buy, and we got rid of all the tv sets from our public rooms. Honest to goodness, it’s one of the best moves we ever made. If we want to watch something... anything... we do it on purpose, and we do it in style.

“The Fall” was a great choice. It’s a clever idea for a story and it’s nifty storytelling. It’s beautiful to look at, and it’s neat and circular and satisfying. I liked it. I liked it a lot. I’ll be watching it again.

“The Fall” reminded me, pleasantly, of “The Princess Bride”, while being utterly different from it.

You see, I told you that this wasn’t going to be anything like a review.

On the other hand, if you’re looking for a recommendation, go and see “The Fall”.

Can I also recommend that you invest in a dvd projector, if you have room for a screen anywhere in your home. Watching pictures made out of light is a far cry from watching them on a screen, and I wouldn’t go back to watching telly... not for quids.
Posted by Nicola Vincent-Abnett at 11:26