Lots of people use their blogs to plug stuff, and I’m not ashamed to say that I do that too.

I advertise the fact that I have FaceBook and Twitter, and that you can friend or follow me on those social networking sites, and I bang on about This Is My Jam on a pretty regular basis, too.

I’ve talked virtually non-stop about “Naming Names”, and the damned thing isn’t even in print... Yet.

I think, though, that this might be the first time I’ve actually plugged something that the husband has written, that has his name on the front cover.

I love the husband; that’s the reason I married him. I also think he’s a fine writer, and a pretty impressive talent. I’m exposed to those things, and I like to think I recognise them when I see them, and that I’m not just biased.

The truth is, I’m not really the husband’s natural audience. He writes a lot of tie-in fiction and an awful lot of comics, and a lot of it isn’t really aimed at middle-class, middle-aged, white women. That doesn’t mean that some of it isn’t really very good, and that some of it doesn’t appeal to me, but, by the same token, I’m not necessarily going to talk about it in the same week as I out myself as bi-polar or talk about adult relationships with siblings, or bang on about grammar or talk philosophy... You get my drift, I’m sure. 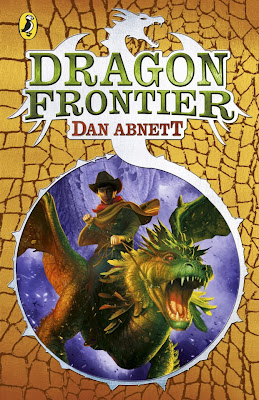 Today, though, I am going to talk about my husband’s latest release, because I love it and because I’m proud of him, and of it, and because, as a parent, even of grown-up children, I want to be an advocate of this book in particular.

“Dragon Frontier” by Dan Abnett is due for release by Puffin on January 3rd. You can get the gist of what it’s about on the FaceBook page that is dedicated to it.

Dan’s written for kids before; he’s written comic strips for everything from "Bananas in Pyjamas" to "Postman Pat" and "Fireman Sam"; he’s written "Noah’s Island" and he’s done those interactive story books where children weave their own paths by making story choices; he’s written "Wallace and Gromit", and "Scooby Doo" and "Rupert the Bear", and almost anything you can think of. This is different, though; this is his first original full-length novel for children aged nine years and over.

It is wonderful and fantastical, and filled with dragons and magic and the wild west, and I can’t imagine any kid not falling in love with the people and the places and the creatures that he has written about, and as the launch date gets nearer I shall be reminding you all to go out and buy a copy for the child in your life, or for the child in your head and in your heart.

It’s another first for the husband, and it’s one I approve of whole-heartedly.
Posted by Nicola Vincent-Abnett at 14:06