Scent of a Woman

I’m a sucker for a pretty smell. The husband’s the same, and the dort.

As a young woman, I wore the same perfume for years. Coco, if you’re interested. In my thirties I began to branch out, and now I buy anything and everything that smells good. I wear different smells for different occasions and for different moods.

I still love Coco and Angel, and I still reach for Shalimar and Mitsouko, because they’re old favourites with lots of memories. They’re good for the nostalgia.

I’m always disappointed when a scent goes off the market. It happens with special editions from time to time, and I hang on desperately to the last half inch in the bottom of a bottle, keeping it for special occasions.

I’m generally not an extravagant person. I’m not usually wasteful

I do like to spray perfume, though, and I do like it to be perfume rather than toilet water.

A lovely man of my acquaintance breathed in, sighed and asked, “Who’s wearing Black Orchid?” when the husband and I were having a drink with some people recently. It was me. It was lovely to give him a whiff of pleasure.

There are times when I never buy a second bottle of a fragrance. Some sit in the tray in my bathroom and are never used up. The dort often whisks away something she likes. I only ever replace those by buying more for her. We don’t share scents. She most often wears Alien, and she wears it well. 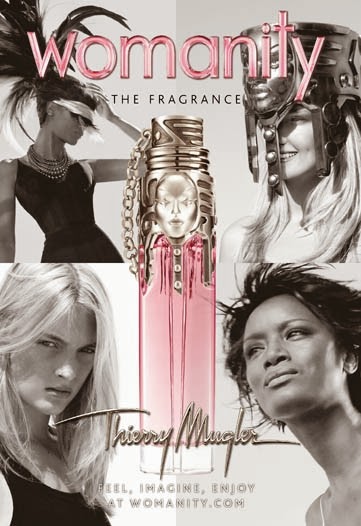 I bought Womanity because it was silly. The name was silly. On the other hand, I doubt I would have bought a perfume called ‘Womanliness’, unless it had smelled particularly wonderful.

Perfume is an expensive business and quite a lot of that expense goes into packaging and advertising. Naming a product is all part of that. The name is part of what sells the perfume. People are employed to come up with names.

Who ever, how ever, why ever, it clearly worked, because I picked up the tester bottle, I sprayed it, sniffed it, marvelled at the name... And I bought it.

It turns out that Womanity is now the husband’s favourite scent on me.

Someone got that scent just right for him.

I’m happy they did.

I’m glad he likes it.

Womanity, though? How ever... Why ever did whom ever come up with that?

I have no idea.
Posted by Nicola Vincent-Abnett at 13:25